PROGRAM OF THE BRENTA TREK

CALENDAR BOOKING WHAT TO BRING

WHO IS OUR GUIDE IN THE DOLOMITES

WHAT IS A MOUNTAIN HUT IN THE ALPS 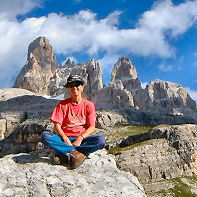 The amazing views in the Brenta Dolomites of big walls, lakes, torrents, colorful meadows and animals

For 30 years our Alpine School has accompanied friends and customers in the Italian Brenta Group on walking trips or via ferrata routes (the famous Via ferrata Bocchette) from lodge to lodge. So far we had never used the "Trade Mark Brenta Trek" until, in the year 2009 our marketing experts decided that every guided hikes in the Dolomites should be named Brenta trek. Our mountain guides school has many offers for roc climbing, mountaineering, high mountains crossing and via ferratas (see our website www.via-ferrata.co.uk ). With our proposal of our Trek, we would like to offer a 4 days guided trekking from hut to hut crossing from the South to the North, the entire Mountain Group, suitable for everybody. The participants only need to have a good physical condition and some experience in the mountains.

PROGRAM OF OUR HIKING GUIDED TRIP 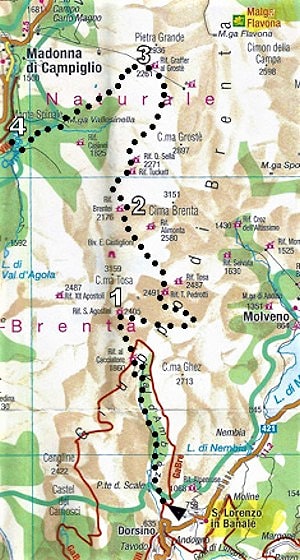 Map of our trek - 4 days crossing of Brenta Group from the South to the North from hut to hut.

The meeting point can be at your hotel at Lake Garda and then we will drive on with the minivan of our mountain guide. There is also the possibility to meet directly in S. Lorenzo in Banale (other possible meeting points to be agreed upon with the participants). From San Lorenzo the pat leads us through a canyon on a comfortable forest road which can also be used by jeeps. After an hour the valley is getting wider with colorful meadows, alpine environment and many animals. Here is the empire of the chamois and marmots, eagles and only recently ibex have been spotted again. After about three hours we reach the Rifugio al Cacciatore (hunters hut) where the food is still excellent. The hikes continues after a snack and in two hours we reach Rifugio Agostini.

Around 8 am in the morning we start our trip from Rifugio Agostini. We ascent by easy walking on the Sentiero Palmieri which is flat at the beginning, after an hour we encounter the first steep slope of our trip. Then we move on to the Forcolotta di Noghera (Forcolotta means pass). Here we take a break to enjoy the panoramic view of the entire Group. The panorama extends to the Lake Molveno. Later we descend on a serpentine path which ends up on a huge flat meadow adjacent to the majestic wall of the Cima Tosa. We turn right towards Rifugio Pedrotti alla Tosa and in a quarter of an hour we reach the famous Bocca di Brenta. Here we are in the heart of the Brenta Group and on the top of our tour. From here begins the "most difficult" line: on a snowfield of which only the first 20 meters are steep. Then the trail is leading further downwards between rocks and equipped with cable until we reach a flat snowfield. From here we can admire the famous Campanile basso and perhaps also the rock climbers on the walls of this fantastic pillar. In an hour we reach our destination of the 2nd day, the Rifugio Brentei. 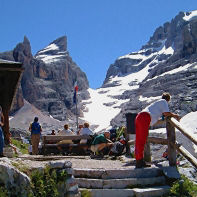 The amazing views of the "Bocca di Tuckett" (Tuckett pass)

From the Rifugio Brentei our path leads us slightly downhill on the most famous trail of the Brenta Dolomites: the Bogani Path. In an hour of walking you reach the junction that leads to the left at Rifugio Casinei. Instead we climb to the right a comfortable path towards the Rifugio Tukkett and suddenly we see the towers of Castelletto. In about an hour we reach Rifugio Tuckett which is usually crowded with tourists - but not at this time. We can easily stop for a capuccino and a good piece of cake and then continue on the path up and down, towards the Passo del Groste '. At the end, slightly downhill, in about two hours we reach Rifugio Graffer al Groste ' . Here there will be many tourists and even "mountain bikers". But civilization, after three hard days of hiking, also has its advantages shower, good food, selection of wines.

After a rich breakfast we depart from Rifugio Graffer at 8.30 in the morning. On an easy zigzag path we go downhill to Vallesinella Valley "On the tracks of the bears". Unfortunately we cannot see any bears since this species is only nocturnal but fresh tracks and deep scratches on the trees are very impressive. On a path through a wild valley with many bear caves, we reach Malga Vallesinella. We descend along a canyon where there are the most beautiful waterfalls in the Alps. The trail is well equipped with bridges and stairs and allows spectacular photos. At the end a flat forest road leads to the new Rifugio Vallesinella where we can have lunch and wait for the arrival of the taxi that brings us back to S. Lorenzo in Banale. This last day consists of a long descent. The hiking time depends a lot on the resistance of the knees and the stops (4/5 hours). In any case there will be the certainty of memories that will accompany us forever.

Total price per person is Euro 560 - minimum number of participants: 4 pax - The price includes:
- guiding by an English speaking, internationally licensed Mountain Guide (UIAGM).
- half-board in the mountain lodges.
- taxi from Vallesinella to S. Lorenzo in Banale.
Please consider the low number of participants because with only 4 people the guide has the possibility to take care of everybody personally. The rate for the trip can reduced only for preformed groups of min. 5 max 7 people 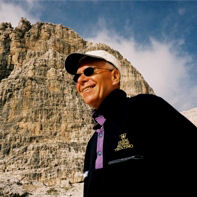 Your guide has grown up in the Dolomites he is an internationally licensed mountain guide registered with UIAGM; English and German spiking

YOUR MOUNTAIN GUIDE IN THE ALPS

Delio's home are the walls und routes in the Alps. He knows many climbing walls in the world but he is still proceeding on our Brenta trek with the same passion and reverence like he did as a child with his father who had introduced him into the world of forests, rock towers and animals. Delio can explain to you the history of every rock or plant in the Dolomites. He would like to pass on to you the his own mountain experience and passion for nature.

DATES OF THE TOURS - BOOKING

When: The dates of the hiking excursions are available on our calendar. You have the possibility to book your individually trip (please not during weekends). You should book by e-mail and at least 30 days before the start of the excursion (as we also have to reserve the the mountain lodges)

How to book and request information: only by e-Mail at least 30 days before the start of the hiking trips.

WHAT TO BRING WITH YOU IN THE BRENTA 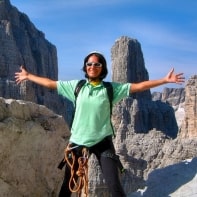 Welcome to the guided trekking routes in the Brenta mountains !!!

WHAT IS A MOUNTAIN HUT IN THE ITALIAN ALPS

During the World War 1, the borderline between the Italian and Austro-Hungarian forces ran through the Alps. Italian as well as Austrian soldiers had built many shelters and huts on these routes in the Alps. After the war the Italian people carried concrete and equipment on their own shoulders for the reconstruction of the mountain huts to make them suitable for hunters and shepherds. Nowadays the mountain lodges in Trentino are owned almost by the CAI (Alpine club) and are rented out to the called gestori (managers) in the high season. The gestore must provide for drink and food being carried up to the mountain lodge by cableway or helicopter because there are no roads, no cars, no traffic. Every day he must provide for electricity and water by generator as well as control the cleaning of the outflow water. At night he must answer the reservation from Europe or overseas and reply to customer complaining ... about the cold shower! Please be nice to him, he has a very hard job and is doing his work with hid passion for mountaineering!

BRENTA TREK from hut to hut in the Brenta Dolomites
Guided 4 days hiking trip from lodge to lodge or hut-to-hut with mountain guides. Crossing the Brenta Group Italy from the South to the North

Via ferrata delle Bocchette in the Brenta Dolomites
Proposal of Mountaineering Alpine School Arco Lake Garda Trentino for the crossing from North to South of Brenta Dolomites in Italy, from lodge to lodge, on the via ferrata "Bocchette del Brenta" with our mountain guides

CANYONING TREK ITALY
Canyoning-trekking guided trips at lake Garda Italy a new style of canyoning in Europe. The Pont del diaol is intertwining legends that are travelling through centuries of history

Our links regarding mountain activities